Snowshoe for the Cure Participant to Celebrate 30 Years of Survivorship 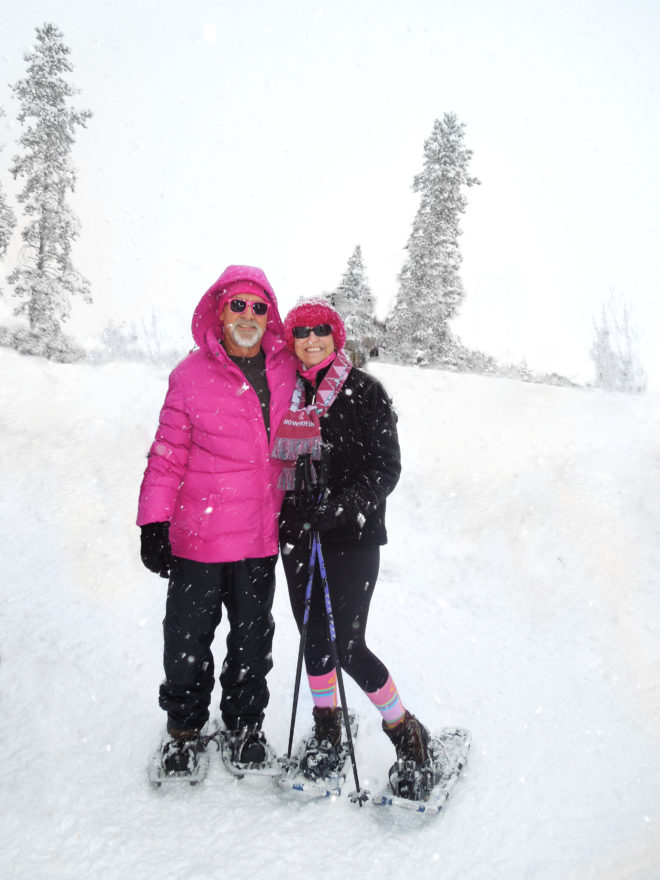 Sheila Niemeier (L) with her husband, Mel, at a Komen Colorado Snowshoe for the Cure at the Frisco Nordic Center.

For the past seven or eight years, Sheila Niemeier, along with some family and friends, straps on her snowshoes for Komen Colorado’s Snowshoe for the Cure held at the Frisco Nordic Center in Frisco.

“The beauty of the mountains, it’s so pristine up there. Everyone is so happy and excited to be there. And they tell wonderful stories of the survivors,” she described. “It’s typically blue skies and gleaming snow. It’s just breathtaking and beautiful.”

Niemeier heard about the Komen Colorado winter event while spending time at her condominium in Frisco. Niemeier, who was already familiar with Komen Colorado’s mission, had participated in the Denver Race for the Cure for many years. She’s a breast cancer survivor.

Two-thousand-and-eighteen will be a big milestone for Niemeier. She will celebrate 30 years as a breast cancer survivor.

“It means a lot. At one point in my life when I was diagnosed, I was maybe afraid that I wouldn’t live to see my daughter’s grow up. They were 8 and 5 years old when I was diagnosed. Obviously I have been able to seen them grow up, and now I’ve been blessed with three grandchildren and watching them grow up. And I have a wonderful supportive husband, and I’ve been blessed with an extra 30 years with him,” she said.

Niemeier was 38 years old when she encouraged by a colleague to get a mammogram. She wasn’t having any issues at the time. But her work friend, who Niemeier estimates was in her 60s at the time, thought it would be a good idea for Niemeier to get a baseline mammogram. So she did.

“They found a lot of calcium deposits all over the breast. They told me to wait for six months. In hindsight I’d never do that again. But they said don’t worry about it. Come back in six months,” she recalled.

Overall, mammogram screening is the most effective tool used to find breast cancer in most women. However, the benefits of mammography vary by age and for women who are at a higher risk of breast cancer.

Niemeier waited the six months recommended by clinicians, then she returned to the doctor for additional scans.

“And they noticed the calcium deposits had changed. I went in for further diagnosis, and that’s when they found I had breast cancer.”

Niemeier sought a second opinion. Ultimately, she had the breast removed and underwent six months of chemotherapy. She also took Tamoxifen for five years. She also had reconstructive surgery.

Like many breast cancer patients whose treatment worked, Niemeier continued to get scans. As the years went by, her original oncologist retired, and she got a new one.

Fifteen years after she was told she was cancer free, she went in for an annual scan, and she received news she wasn’t prepared to hear.

“[My oncologist] gave me a coin, and she said don’t come and see me anymore,” Niemeier remembers. “She said we have to focus on sick people, and you’re not one of them. I got teary eyed and concerned. And she said you can certainly come back when you don’t feel comfortable, but I’m pretty confident that you don’t need to.”

Breast cancer patients and their providers often are so focused on saving their life that after care is an afterthought, and it is often not discussed. Many survivors face PTSD, depression, and anxiety after they are told they are well.

Niemeier, at first, was worried about eliminating the annual testing. But she said her anxiety about the breast cancer returning slowly diminished.

“I think you build confidence. I never did go back in after the 15 years,” she said. “As I said, [the oncologist] was very encouraging and supportive. I didn’t feel like she cut me off. I slowly just moved on and felt more confident that I wouldn’t have another reoccurrence.”

Niemeier did face cancer again, but not breast cancer. In the past two years, she was treated for a rare nasal cancer. She continues to have follow-up tests to ensure it hasn’t returned.

Despite facing cancer twice, Niemeier remains grateful for extended time with family and friends. She credits her one-time colleague for saving her life.

“At one point I talked to my gynecologist about my breast cancer, and I asked him what would have happened if I had waited two more years to get a mammogram. He told me you probably would have died,” Niemeier said.

Niemeier once again will attend the 2018 Snowshoe for the Cure. She said participating in the event is important to her.

“It’s so much more beneficial to me than just mailing in a check. I get something out of this too,” she said. “Participation and giving support to the others survivors is important to me. A lot of those women have been recently diagnosed, and they need to see that survivors are there and they’re still coming to Snowshoe and their lives and have gone on.”

To learn more about Snowshoe for the Cure and how you can help support finding a cure, as well as local Coloradans fighting breast cancer, check out our website.