Shari Lynch: It Could Happen to You

It Could Happen to You 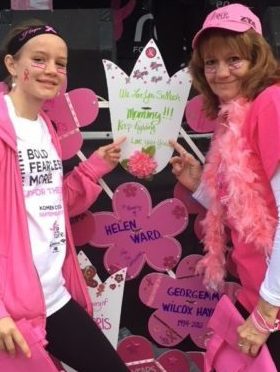 Shari Lynch didn’t think breast cancer would happen to her. But it did nine years ago. Lynch, who benefited from a Komen® Colorado treatment grant, is doing well today. She recently shared her story with us, and she urges other women to know their bodies and get their mammograms.

A Concern for Others
In early 2008, 44-year-old Shari Lynch, an LPN from Gilcrest, had a lot on her plate. Lynch, who was a hospice nurse, was a newly-single mom whose own mother recently had passed away. Her focus was taking care of her girls and her patients.

“I wasn’t one to do self breast exams,” Lynch said.

At this stage of her life, Lynch had had a mammogram, but she didn’t think breast cancer would happen to her.

“I joked about it because I was such a small-breasted person. I’d say, ‘If I get a lump it will be bigger than my boob,’” Lynch chuckled. “I said it all the time. I wish I had taken it more seriously.”

The Unexpected Occurred
Lynch’s passive outlook about breast cancer soon would change. In February of that year she saw a something protruding in her breast.

“I noticed something at the top right of the breast, and I touched it and found the lump,” she said. “It was a little bit dimpled, too, so I thought it was odd.”

Lynch thought the lump in her breast was unusual, but it did not immediately alarm her. She chalked it up to a cyst or something relatively minor. Lynch’s colleagues, however, many of them also nurses, encouraged her to get the lump checked out.

On March 7, 2008, Lynch’s 45th birthday, she got a mammogram followed by an ultrasound.

Lynch recalled being seated in a hallway after the follow-up imaging. She said no one would look at her.

“I knew something was up,” Lynch said.

The radiologist told her three lumps were found, two smaller ones behind the lump Lynch had discovered.

“I started crying because all I could think about was my 3-year-old daughter,” Lynch said.

True to her nature, Lynch put the troublesome news behind her that afternoon. She went home and celebrated her birthday at party her toddler had helped plan for her.

Lynch had a biopsy three days later. The results: invasive ductal carcinoma. IDC is the most common form of breast cancer. It begins in the milk duct but spreads to other parts of the breast. Lynch’s tumors also were HER2-positive. HER2-positive cancer cells tend to grow and spread faster than other breast cancers.

Help in Times of Need
Doctors said Lynch required chemotherapy to shrink the tumors before she had surgery. While she had insurance through her employer, she said it didn’t cover all of her medical costs. Komen Colorado was able to help.

Now part of the UC Health system, Poudre Valley Hospital, in Fort Collins, had a Komen® Colorado grant, in 2008, to assess each breast cancer patient’s financial status and to connect those in need to financial assistance. The patient navigation and treatment services grant that helped Lynch remains in place today.

Komen Colorado continues to fund grants throughout our 22-county service area that help women like Lynch. In 2016, Komen Colorado awarded nearly $970,000 to 18 non-profit organizations, hospitals, and health clinics to increase access to breast cancer care for Coloradans in need. If you or a loved one needs financial assistance with a mammogram, diagnostic testing, or treatment, please review our online resources.

Lynch would go on to have six months of weekly chemotherapy. During that time, she said she never took off work due to the chemo. Lynch said her family, friends, and colleagues got her through the tough times, enabling her to continue to help others who were at the end of their life. Lynch said it didn’t bother her to care for those who were dying while she was treated for breast cancer herself.

Following chemotherapy, Lynch’s tumors had either disappeared or shrunk. She decided to have a double mastectomy and reconstructive surgery.

Passing along Encouragement
It has been nearly 10 years since Lynch first found the lump in her breast. By all accounts she is doing well, and there have been no relapses. Lynch also continues to help others through nursing. No longer in the hospice field, she now works at a senior assisted living facility.

Lynch also participates in the Denver Race for the Cure. For her, it’s an opportunity to reflect and celebrate, and she also takes time to encourage others who currently are fighting breast cancer.

“I tell people at Race it will get better,” she said.

Looking back, Lynch said she wishes she had paid closer attention to her body.

“I would say it’s very important to do you breast exams and do your mammograms, and don’t think it couldn’t happen to you. That’s what I thought,” she said. “There’s a lot of programs out there that can help you if you don’t have insurance.”

Susan G. Komen® encourages women to know what is normal for their body and individual risk of the disease. All women should immediately talk to with their health care provider about any changes they notice, as well as discuss when to begin screening based on their individual risk.

While mammography continues to be the most-effective breast cancer screening tool, when to begin screening, and whether to complement mammography with genetic counseling or other tests, is not the same for all women. Learn more about screening guidelines based on individual risk.