Michelle Segura: A Story of Survival

A Story of Survival 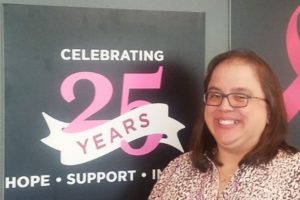 Michelle Segura began to support Susan G. Komen® Colorado in the Denver Race for the Cure® in 2004, the year her mom was diagnosed with breast cancer. Segura has most of the picture buttons she and her mom have taken throughout the years at Race. The buttons serve as a timeline of sorts of Segura’s family life and health.

Little did Segura know she soon would be the one to wear the pink Survivor shirt in subsequent Race button pictures. Segura was diagnosed with breast cancer herself mere weeks after what would be her final Race for the Cure with her mom.

Segura said she first felt a large, solid lump in her breast as she pulled her long hair back into a ponytail.

“I grazed my breast and felt it,” she recalled.

With a mom who, at the time, had metastatic breast cancer and a grandmother who died of the disease, doctors quickly scheduled Segura for a mammogram.

“They said, ’We’ll see you tomorrow’ after I ran through my family history,” Segura said.

Within a day or two Segura had a biopsy.

At age 38, she was diagnosed with DCIS, ductal carcinoma in situ. It’s a non-invasive breast cancer where the abnormal cells are contained in the milk ducts.

“It was stage 0, and for all intents and purposes I was cured,” Segura said.

Segura tested negative for a BRCA mutation, but she elected to have a bilateral mastectomy for her course of treatment.

“My grandmother died of it, my mother had it, and I didn’t want to be looking over my shoulder the rest of my life,” she said.

A couple of years later Segura developed a chronic cough, and she was having female reproductive issues.

After several visits with different doctors, Segura once again was diagnosed with cancer. This time:  lung and endometrial cancer.

She underwent chemotherapy for the lung cancer, and she had radiation and a hysterectomy for the endometrial cancer. Despite doctors’ pessimistic outlook about her survival of the lung cancer, Segura entered remission in August 2013.

Looking to the Future

December will be seven years since Segura was diagnosed with breast cancer and that timeframe has taken an emotional toll.

“I’m at the seven year mark, but so was my mom [when her cancer returned], and we thought she was golden,” Segura said.

Segura tries to focus, though, on what’s in front of her: her life and her health. She said she is committed to losing some weight and being healthier.

“I don’t always show it, but I do know I’m lucky. To look at me you would never know [I had cancer], but I have the scars to prove it,” she smiled. “I do realize I need to work on showing my gratitude.”

Segura’s advice to others is to “get tested and be diligent.”

“There’s help for you if you need to get your mammogram, and there’s no shame in saying I know I need one, and I can’t afford one,” Segura said.

The signs of breast cancer are not the same for all women. Susan G. Komen® underscores the importance of breast self-awareness – know what’s normal for you.

Read about understanding your risk, screening, and maintaining breast health.

If you or a loved one needs financial assistance getting a mammogram, diagnostic testing, or treatment, the Komen Colorado grants program may be able to help. Find resources in our 22-county service area here.

⇐ Shari Lynch: It Could Happen to You
Melissa Turner: One test. Three genetic markers. A family gets answers. ⇒
Go to Top