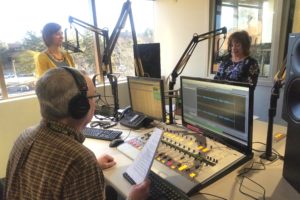 Huston, who is a breast cancer survivor and co-survivor, asked honest and tough questions. For instance, he noted he seems to continually hear about another friend or loved-one with a breast cancer diagnosis.

“You guys are vigilant about raising money and trying to stop the process, but it just doesn’t seem to be getting any better on the outside looking in,” Huston said.

While it’s a sentiment some people share, Primavera said it’s probably not an accurate one. She pointed to decades of research that has generated enormous strides in breast cancer detection and treatment.

“One in seven [Colorado] women will be diagnosed with breast cancer, and that could be due to a couple of things. One is we have better ways to detect [breast cancer] now…We’ve pushed early detection and that’s really important,” Primavera said.

Thirty years ago, doctors knew of only a few breast cancers. Today, Coleman said, researchers have identified 200 different types of breast cancer. These discoveries have changed how breast cancer is treated on an individual basis.

“[That] is a milestone in and of itself. That alone has made the survival opportunities for so many women and men diagnosed with breast cancer that much more positive and more likely as long as it’s detected early,” Coleman added.

Huston’s breast cancer was stage 1. He said he found a lump when wrestling around with his grandson.

“He head-butted me in the chest, and I went, ‘Wow, what is that? That doesn’t feel right,’” Huston said.

“And, of course, working with Komen Colorado I [knew to get my lump] checked immediately,” Huston said.

While Huston’s doctor thought the mass was likely a cyst, a biopsy proved otherwise.

Huston credits the early detection to his not having to undergo radiation or chemotherapy. He said a male mastectomy was all he needed to treat the cancer.

Stories like Huston’s are why Komen Colorado underscores annual screenings for all women.

“It’s really important for a woman not to only get annual mammograms appropriate for them and their risk factors, but to also be vigilant and be aware of their bodies and their health,” Coleman said. “If something changes, even if they got a mammogram six months before, to still be confident that they should go to the doctor and get it checked out because only a doctor can determine if it’s something benign, like a cyst…or if it’s something more dangerous like cancer.”

While it may sound easy to go get a mammogram or have a lump checked out, many people face a number of breast health care hurdles. Primavera said one of the greatest barriers is a lack of insurance – or not enough of it.

Still, some communities have a greater risk of getting and dying from breast cancer. Take African American women, for instance. While they are less likely to be diagnosed with breast cancer, they’re nearly 30 percent more likely, in Colorado, to die from it.

“African American women are more likely to have [aggressive] triple negative breast cancer, for example, and there might be other biological factors that we haven’t been able to pinpoint quite yet,” Coleman said. “There’s a lot of research focused on identifying why these disparities exist…that contribute to late stage deaths.”

Komen Colorado is strategic in its grant funding process. It ensures clinics and hospitals that receive Komen Colorado funds work with disadvantaged communities affected by socioeconomic and cultural disparities.

“But we also know it’s not just about paying for care,” Coleman said. “It’s about education and advocacy. We also work on the ground by going out and educating communities about what are risk factors; what are screening guidelines; where can they go to get care if they don’t have insurance or other resources.”

“Next to the federal government, Komen is one of the biggest funders of breast cancer research,” Primavera said.

To hear the full conversation, which includes information about genetic testing, male breast cancer, and aggressive and metastatic breast cancers, click the play button at the top of the page.