Celebrating 40 Years of Survival at Snowshoe for the Cure

When Sharon Sibr found a lump in her breast in the fall of 1977, she went straight to the doctor. Sibr was 31 years old. 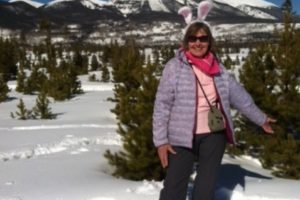 Sharon Sibr at Komen Colorado Snowshoe for the Cure. Sibr celebrates 40 years of survival this year.

“I’m a nurse and I don’t mess with stuff like this,” she said.

Sibr’s doctor tested to see if the lump was a cyst. It wasn’t.

“Within a month it did not reduce in size,” Sibr recalls.

She had breast cancer.

“I had very poor chances of survival,” Sibr recalls.

Her children were 2, 5, and 7 years old at the time. Sibr remembers a doctor telling her husband that if he had contemplated a vasectomy he should reconsider.

“I told the doctor, ‘I know what you’re trying to tell this guy, but I’m going to survive this,’” Sibr said.

She resolved to maintain a positive outlook despite an unfavorable prognosis. Sibr had a modified radical mastectomy where surgeons do not remove as much muscle as a radical mastectomy. She then underwent a year of chemotherapy.

“It was a blessing my children were little because they kept me busy. I didn’t have time to think about it,” she said. “And I wanted to hear stories of survival. I kept positive thoughts in my head.”

After completing chemo, it would be another decade before doctors gave her the all clear. During that time Sibr had to have a second biopsy. That time results did not show cancer.

Sibr said she managed the anxiety about having a recurrence with “a lot of prayer, especially at first.”

Many breast cancer survivors face anxiety and fear after they are told treatment was successful, worrying follow up scans will reveal cancer has returned. Experts say these feelings tend to diminish with time.

Decades after she was diagnosed with breast cancer, Sibr traveled to Summit County, Colorado from her Illinois home to spend February skiing in the majestic Rockies. That’s when she heard about Komen Colorado’s Snowshoe for the Cure.

Held at the Frisco Nordic Center, Sibr began to take part in the event. Soon her friends joined her.

“It’s the camaraderie and the people that I’m with,” Sibr said. “It’s such a positive experience. It’s fun. We do it every year,” she said.

Sibr plans to ramp up her fundraising this year to commemorate her survival and honor the battle of others.

“This year, because it’s 40 years, and my cousin is battling breast cancer, I’m going to write a letter asking for donations,” she said.

Sibr will celebrate her special anniversary in Frisco with loved ones. Missing will be her husband who supported her while she fought breast cancer. He passed away 15 years ago from colon cancer.