Broncos Gain Yardage In The Fight Against Breast Cancer 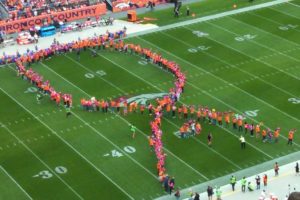 Susan G. Komen Colorado has long enjoyed a winning partnership with our hometown world champions Denver Broncos. As the most frequently diagnosed form of cancer worldwide, breast cancer has undoubtedly touched the lives of many players and staff members.

“My grandmother died of breast cancer when I was in the fifth grade,” said star linebacker Von Miller. “All of my dreams that I shared with my grandmother, she said yes to all of them. Every time I put on that pink it, is dedicated to my grandmother.”

Defensive backs coach Joe Woods’ mother fought against the disease twice and unfortunately lost the second bout. It is the spirit of heroes like Miller’s grandmother and Woods’ mother and the passion for the pursuit of a cure that has fueled and inspired the Denver Broncos to expand their focus and launch the “Fight Like a Bronco” campaign.

“There are members of our own staff that have been diagnosed with breast cancer, so it certainly hits close to home,” said Denver Broncos Vice President of Community Development, Cindy Kellogg. “Over the last few years we’ve heard from our community about the devastating impact of all cancers and we wanted to do something more expansive to help.”

The Fight Like a Bronco campaign was the answer to that call for help.

On October 9, 2016 the Denver Broncos hosted their annual Salute to Survivors game, graciously extending an invitation to cancer survivors and supporters of all types. Nearly 75 breast cancer survivors and co-survivors represented Komen Colorado and were joined by a community of cancer survivors for a special VIP brunch. They were also welcomed on the field for a ceremonial halftime show in their honor.

Komen Colorado was honored to accept a surprise donation of $20,000, the largest gift the Broncos have ever awarded the organization.

The Denver Broncos exemplify the meaning of More Than Pink and we salute them for their commitment to walking alongside those affected by cancer. Together we will Fight Like a Bronco – and win!