After mammography was shown to be an effective tool to detect breast cancer at early stages of disease progression in the late 1980s, the use of screening mammography in the U.S. quickly increased.

In 1987, 29 percent of women 40 years and older reported having a mammogram within the past two years. By 2000, mammography use increased to 70 percent.**

Since 2000, there has been a slight decline in mammography use for reasons that remain unknown. **

Learn more about how rates of screening mammography vary among different groups of women.

For maps of breast cancer incidence in the U.S., visit the National Cancer Institute (NCI) website.

Breast cancer mortality (death) rate in the U.S. increased slowly from 1975 through the 1980s.*

This decline in mortality is due to improved breast cancer treatment and early detection.** However, with 40,000 women dying from the disease each year in the U.S., Susan G. Komen doesn’t believe that’s good enough – and is why we have announced an aggressive goal to cut in half the number of breast cancer deaths by 2026.

Washington D.C., Louisiana, and Mississippi have the highest breast cancer mortality rates. Hawaii has the lowest.** Research in Colorado has shown that people diagnosed with breast cancer who live in communities with lower household incomes have lower long-term survivorship rates than those from more affluent communities.

For maps of breast cancer mortality in the U.S., visit the NCI website.

The charts below illustrate the difference in incidence and mortality by Race and Ethnicity.*** 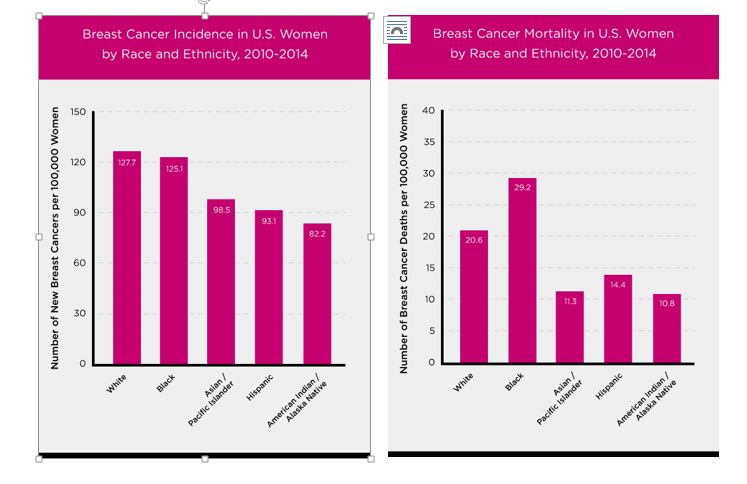 Learn more about disparities related to breast cancer in Colorado.