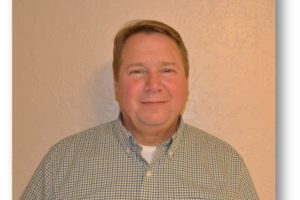 For nearly 10 years, Rodney Heiden, of Greeley, has provided the Komen® Colorado Race for the Cure® pace car. It’s not just any car, though. It’s his sister’s 2008 limited-edition Warriors in Pink Ford Mustang.

“When I get it out, clean it up, and get it ready it just gives me time to pause and think about my sister,” Heiden said.

Heiden’s sister, Kathy Heiden, of Atlanta, died, in 2008, from breast cancer six years after she was diagnosed with the disease. She was 49 years old.

There was no question for the Heiden family about what to do with their beloved Kathy’s Mustang. They would keep it.

“For what the car stood for. Why Ford recognized it needed to be built. Why Kathy decided she needed to purchase it,” Heiden said.

When Kathy Heiden passed away, the white Mustang – embedded with breast cancer awareness ribbons, pink body striping, and other pink details – had fewer than 400 miles on it. Kathy Heiden bought the car shortly before she died.

Heiden said his sister loved Mustangs, and he said she appreciated that a portion of the car sale would go to Susan G. Komen®. In addition to being a car enthusiast, Kathy Heiden is described as someone who was fiercely dedicated to education and helping others. She was a public health officer for the Centers for Disease Control and Prevention, and Heiden said Kathy Heiden happily drove her Mustang around Atlanta before she died.

Today, her car is kept in storage, and it is only taken out for special occasions and the Race for the Cure in Denver.

Heiden said his sister’s car originally was intended to lead the 1-mile family walk. It was through a serendipitous event that Kathy Heiden’s Mustang became the Komen Colorado 5K pace car. In 2008, the 5K pace car was damaged in a traffic accident as it was being delivered to the Race venue. With a car at the ready, Heiden stepped in, and his sister’s car has led the main event ever since.

Family members or close friends drive the car on Race day, and Heiden often invites survivors to ride along in the car.

“We maintain a guestbook in the glovebox,” he said.

This year, with roughly 600 miles on the odometer, Nicole Danielson, of Wisconsin, will fly to Denver to drive the Race pace car. Danielson is Heiden’s niece. She’s also a 12-year breast cancer survivor – diagnosed at age 35.

“I was just honored. How could I say no,” Danielson said. “It’s a tremendous privilege.”

Long-time Komen Colorado volunteer Barb Jones will be a passenger in the pace car. Jones has volunteered in many capacities since 2000. Today, she helps coordinate the Race survivor ceremony. Always lending a hand on Race day, Jones has never seen the 5K course.

“[Race coordinator] Erin Stoen said maybe we can get you in the pace car, but I never expected it to happen,” Jones said. “I was so excited [it happened]! I just jumped up and down for joy.”

Knowing the history of the pace car makes the ride even more special for Jones who is an 18-year breast cancer survivor. She added Race will be day of camaraderie.

“It’s the beginning of the day for some people. They’re on the course with so many others celebrating themselves, others, their family. It’s sisters and brothers and moms and dads and all these people who have been survivors, people who are supporting survivors. It’s very important to them,” she said.

For the Heidens, this year’s 25th anniversary Komen Colorado Race for the Cure will be a day of reflection and advocacy.

“[Our] family many times after the Race speaks about what occurred for that day and the impact it has had on so many people and so many families,” Heiden said. “There’s help out there, and there’s a sympathetic ear so you can speak of your troubles to others. And there’s resources out there.”

As for what Kathy Heiden would think about her story being told and her Mustang being used in the Denver Race for the Cure, Heiden said she would shy away from the attention.

“She was humble. I can’t say she would be honored, but I would have to say that she would welcome the ability to assist or to help or to serve,” he said. “She always had a kind heart.”