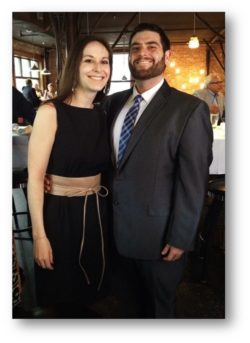 Jake Zwerdlinger’s 2018 Pink Tie Guy story is one of prevention. A story that began when his sister Molly decided she would get tested to see if she had a BRCA genetic mutation that greatly increases her chances of getting breast and ovarian cancer.

The Zwerdlinger siblings new their paternal grandmother was a breast cancer survivor, but they didn’t know much beyond that.

“We just knew she was a survivor and received treatment. No one really talked about it. She did a single mastectomy and that got rid of the cancer for her,” Jake said.

They also knew their mother’s sister had passed away from ovarian cancer at age 32. Her daughter, though, does not have the genetic mutation.

“[To potentially have this mutation] was never even on our radar,” Jake said. “If [our cousin] is negative, my sister thought she had to be negative, too. The idea didn’t even cross our minds that this might be from the [paternal] side.”

There sometimes is a misconception that BRCA genetic mutations are passed on only from female family members.

Molly decided she wanted more answers, but it didn’t prove to be an easy road. She fought a long, unsuccessful fight with her insurance company to get genetic testing. Molly ended up paying for the testing out of pocket.

Molly’s test results: positive for BRCA 2 genetic mutation. Molly has up to a 90 percent chance of developing breast cancer.

But from which side did the mutation come? Molly and Jake’s parents both were tested. The testing revealed it is their father who is the carrier.

In Jake’s nomination, Molly said, “I was an absolute mess when I found out. Jake was there to support me in all ways but one: he did not want to get tested to find out if he also had the gene.”

It took a year and a half before Jake would decide to find out if he had the mutation.

“He told me he wanted to protect any future daughters he may have,” Molly said. “And he did not want me to feel alone in having this mutation.”

“[Getting that news] was the first time I felt alone,” Jake told Komen Colorado. “And how was I supposed to tell my mom and my dad that, ‘Hey, you passed this on to your son and daughter?’ And what happens when I want to have children?”

While Jake’s genetic mutation only slightly increases his risk of being diagnosed with breast or prostate cancer, the biggest risk is passing the mutation on to his children. Jake has a 50 percent chance of passing on the gene. And if his spouse has the mutation, matters become more complex.

While Jake was first taken aback by the news and what it might mean for his future, he now takes comfort in knowing that he and Molly are “doing this side by side.”

“She’s not doing this by herself,” Jake said. “I am at much better at peace with it now.”

Today, he feels it’s important to shine a light on male breast cancer genetic mutations, as well as be an advocate for genetic testing.

“I think it’s so important that science has progressed so much that we can predict something that could affect our families before they become a life-threatening issue,” Jake said. “People look at me sometimes and say, ‘So you’re not sick?’ But that doesn’t mean my sister or my children will be healthy.”

So far, all of Molly’s scans and tests have shown no malignancies. She has decided, though, to undergo preventive surgeries to further reduce her risk of getting breast or ovarian cancer.