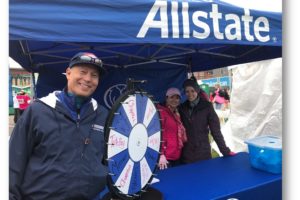 2018 Pink Tie Guy Frank Romer is best known for getting his employer, Allstate Insurance, involved with Susan G. Komen® Colorado. For the past decade, Allstate has been a proud sponsor of Komen Colorado’s Race for the Cure and Pink Tie Affair.

Most stories like this one begin somewhere, and, for Frank, it wasn’t in an office building.

When Frank was only six or seven years old his mother, Isabel Romer, was diagnosed with breast cancer. She was only 27 years old.

“At that age, I didn’t know what was going on. They did radiation, and they got rid of it,” Frank recalled.

For many years, Isobel was well. She watched Frank grow up, then get married. But the happy times were halted 30 years into their lives when Isobel’s cancer returned.

“I remember when she told us that. My wife and I had our daughter, and she was young,” he said.

Frank’s wife, Marcy Rothenberg, writes in her Pink Tie Guy nomination that “he was a tremendous support to her.”

“My mom was a real fighter,” Frank said. “I saw the treatment and how tough she was and never gave up…To see my mom the last fear years, it was just very difficult.”

Isobel passed away eight years after her recurrence.

Frank wanted to continue that support after his mother passed away. He made it his mission to bring about awareness of breast cancer and to raise funds for research, as well as testing and treatment for underserved Colorado women.

“My wife and I wanted to do something to support Komen Colorado after my mom passed away in 2000,” Frank said. “We started walking [in Denver’s Race for the Cure.]”

He proudly noted his wife has been a top fundraiser.

But for Frank, walking and raising funds wasn’t enough. He wanted to do more, something on a larger scale. That’s when he decided to try to get Allstate involved.

“As the regional marketing manager, to make that decision, it was easy. As time goes on they look at our budget. It’s a big sum of money, and I give them the same reasons why they should continue to support Komen Colorado…supporting the community and worthwhile causes. No one has ever said we shouldn’t support Komen anymore,” Frank said.

Frank said forming the partnership with Komen Colorado was “the right thing to do to hopefully eradicate this terrible disease.” While Frank admits a cure may be a long way off, he said Komen has saved many lives, like two of his cousins and aunts, by promoting early detection.

He adds that benchmarks, such as the Bold Gold to reduce U.S. breast cancer deaths by half by 2026, help propel Komen closer to finding a cure.

“It would be a great story that there’s a cure, but that may be elusive…but we can reduce mortalities by 50 percent through early detection and treatment,” he said.

In recent years, Komen has focused its research grants into metastatic breast cancer and aggressive breast cancers in an effort to gain better understanding of and treatments for these cancers that result in more deaths.