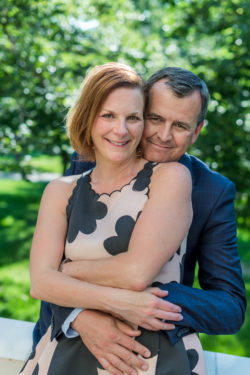 2018 Pink Tie Guy Dustin Whistler met his wife, Tamra Ward, about a year-and-a-half after Tamra had completed her breast cancer treatment, so he is quick to point out there are a host of people who helped her through the tough part of cancer.

But sometimes one of the toughest parts of breast cancer happens when treatment ends. There are follow-up appointments, tests, and scans to monitor whether the cancer has returned. Anticipating the “all clear” can weigh just as heavily on a spirit as being in the throes of treatment.

Dustin told Komen Colorado he began to go to Tamra’s mammogram and oncologist appointments last year, and he admits the visits can be emotionally taxing.

“I wasn’t in the middle of her illness, and what I fear is that every year it is a real possibility that we will walk away with a change in our lives. Our battle of a recurrence in her breast cancer,” Dustin said. “I know she doesn’t want to go back to that. It’s very tangible in that way that we all hope we don’t have to go through that again with our loved ones and friends.”

Like many others, Dustin’s hope is for a cure so women like his wife will not have to live with the anxiety of a recurrence.

Already an ally to Komen’s mission, Dustin was drawn closer to Komen Colorado’s mission after he found his own breast lump.

“Normally, I kind of blow things off, but I thought, ‘Wow, this is more than my normal body,’” Dustin recalled.
Dustin didn’t want to worry Tamra, so he visited his doctor. But his doctor recommended he have the lump further inspected.

“I felt like I needed to protect her, but as soon as I knew what I needed to do, I called and told her,” he said.
Fortunately, for Dustin, the lump was benign. And now he finds it more important than ever to spread the word about awareness, mammograms, and knowing what’s normal for one’s body.

“I guess going through that was just a little bit of a lens on a glimpse really what everyone else has gone through in their breast cancer journey,” Dustin said. “In some ways it’s just about personalizing it even further for me. It’s even more real to me now.”