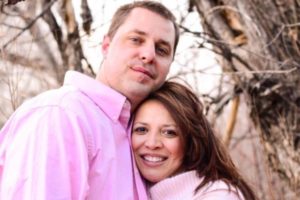 Pink Tie Guy Ben Harrison is a working husband and dad who strives to make his young family’s life as happy, normal, and comfortable as possible. That’s what most men want for their families, but Ben’s family is different than most. His wife Avery, who is in her early 40s, lives with metastatic breast cancer.

Avery’s original diagnosis, in 2014, was Stage IV HER2 positive breast cancer. It had metastasized to both breasts, her liver, and her spine and hip. Avery was 38 years old. The Harrisons’ daughter was only two years old.

“It’s difficult,” Ben told Komen Colorado. “I try to be there for her every day and walk her through all the doctor appointments and just everyday life.”

Two years after Avery was diagnosed, doctors told her the cancer had spread to her brain. Ben said there were 13 tumors.

Avery had brain surgery to remove one of the tumors that was considered life-threatening. She also endured whole brain radiation.

Ben added, despite Avery originally being diagnosed with Stage IV breast cancer, doctors didn’t use the term “metastatic breast cancer” until the brain lesions were discovered.

“There’s not a lot of knowledge about metastatic breast cancer,” Ben said. “Getting people educated about what it is important. When Avery was first diagnosed, we were told she had Stage IV breast cancer.”

Researchers continue to try to understand why breast cancer metastasizes, and Susan G. Komen has focused its research grants in recent years on metastatic disease.

Four years after being diagnosed, Avery continues to live with metastatic breast cancer. She currently is involved in clinical trials. While some medicines have worked, the benefits can wane, so it’s on to another clinical trial.

Avery’s mother, Lynne Hendrix, who nominated Ben to be a 2018 Pink Tie Guy, said her daughter is a “trooper” and understands cancer “is out of her control.”

Hendrix wrote, “I could not have prayed for a more perfect partner in life for my daughter; I do pray that she will grow old with her best friend.”

Ben hopes to generate a dialogue about metastatic breast cancer and the importance of research into the disease and treatments for it.

Life is fragile for the Harrisons, but Ben said they have found that keeping a positive outlook improves Avery’s response to treatment and her overall quality of life.

Their motto: “live, laugh, and love.”