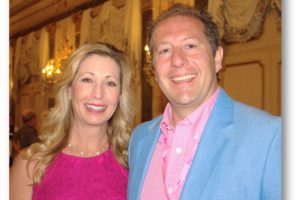 2018 Pink Tie Guy Alex Zaveral and his wife, Julie, were recently engaged in May 2004 when Julie found a lump in her breast. She was 30 years old. Not too concerned about her finding, Julie went on vacation with Alex, and she made an appointment with her doctor for June First. Like many newly-engaged women, Julie was wrapped up in wedding planning. After securing their wedding ceremony venue, Julie wanted to cancel her appointment.

“It was such a great day that I didn’t want to ruin it by going to the doctor that afternoon, so I told Alex I was going to cancel my appointment, that I was sure [the lump] was nothing,” Julie recalled in her Pink Tie Guy nomination. “However, [Alex] wouldn’t let me cancel. He said, ‘You made the appointment. You need to go, and I will go with you.’ Thank God he did.”

Julie was diagnosed with Stage II breast cancer that had spread to three lymph nodes.

“So instead of planning a wedding, we went into planning treatment and survival mode,” she wrote.

Julie had a double mastectomy and endured six months of chemotherapy.

With their wedding postponed, Julie said she tried to end their relationship. She said the treatments had taken an emotional and physical toll on her, and Julie would not be able to bear children.

But Alex had received some sage advice from his godfather.

“I remember my godfather called me and said, ‘You’re now the rock, and you need to be the rock for Julie.’ And I took that call to heart. I said OK. I’m the rock,” Alex said.

Alex was all in.

He accompanied Julie to every doctor appointment. He spent nights with her in the hospital. He was there the first time Julie saw her chest after surgery.

“He was there when my hair was falling out, sweeping it up off the floor, telling me its ok it will grow back, and you are beautiful with and without hair. He is the one and only person who has been there 24/7 through it all with me: good, bad and ugly. And trust me there has been some really hard times,” Julie said.

The couple eventually married, and they thought they had “beat” the cancer. She and Alex began to discuss adopting a child. They bought their “dream house.”

In the midst of all the planning, once again, the couple received devastating news. Eighteen months after treatment, Julie’s cancer was back with a vengeance. It was in her bones, lungs, spine, and chest wall.

And, again, Julie tried to push Alex away.

“This time, he writes me the most beautiful letter, gently telling me to stop pushing him away, that we are in this together and he is going to be by my side,” she said.

Julie has lived with metastatic breast cancer for six-and-a-half years. And she gives Alex all of the credit for that success.

Julie said, “[Alex] is the example of what a co-survivor should be, and I wish I could clone him for others.”

Today, Alex also supports his mom who recently was diagnosed with breast cancer.

In addition to helping Julie and his mom through their breast cancer journeys, Alex joined Komen’s fight. He is a long-time Komen Colorado volunteer and generous donor.

“My wife has the passion for ending breast cancer, and that translated down to me and what can we do for others who aren’t as fortunate to have a mammogram? We have taken that to heart from the very beginning,” Alex said.

For Alex, his long-term hope is a cure. But in the meantime, he said he thinks researchers, with the help of Komen, will develop treatments that will enable breast cancer patients, like Julie, to live long, quality lives.